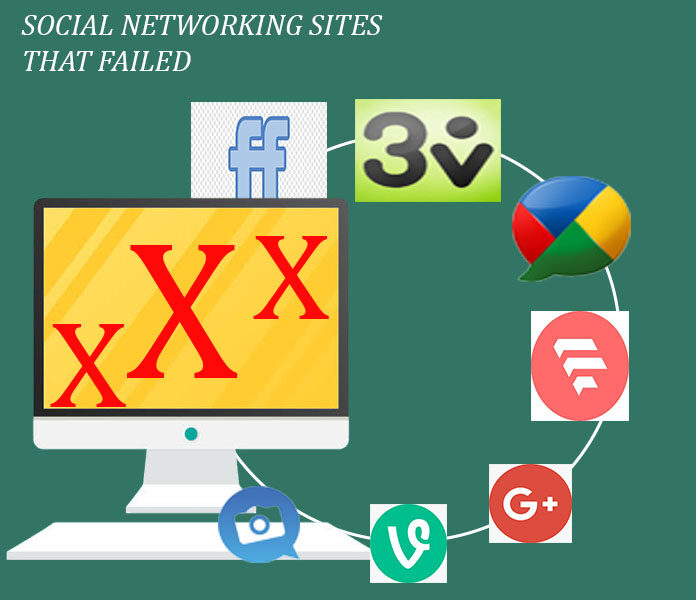 It’s safe to say that social media has changed a lot lives not only Nigeria but the entire world as a whole. It’s no news that Social networking has taken over (almost) if not all everyone’s life form communication to marketing.
The way marketing is done these recent years is totally different from how it was done a few decades ago, and all thanks to social media.

Even communication has become easier through the use of Facebook, Twitter, Instagram, and WhatsApp (instance messaging app) the only required is for people to have a decent internet connection.
Most social media has failed to become successful, and some have totally failed and went into extinction but still, social media platforms will continue to come and go.
In this article, I have put together some social media platforms that failed and went into extinction.

1. Friendfeed was a social- aggregating website, founded by a set of former Google employees. It was launched in 2007.
This social media used another social media like Facebook to create their own network, and also they focus on relevancy and usefulness on those sites then incorporate it to their own website.
Facebook bought Friendfeed in 2009 for $15million in cash which is equivalent to 1931150000.00 in Nigeria currency and 32.5 million in stocks.
Unfortunately, FriendFeed was shut down for good in April 2015.

Fritfinder was firstly used in the united kingdom, it covers 52 UK universities, including UCL, Oxbridge, Durham, Imperial College London to mention a few
This networking site is built on the idea of anonymously posting of both location and description of attractive persons who was spotted, the details of these people will be posted on fitfinder for everyone to see.

Unfortunately, fitfinder because of the nature of the generated user contents, commentators accused it of being diminishing and unseemly.

On 28 May 2010, the fitfinder website was brought down because of the continuous increase in pressure from universities. And the huge fine UCL imposed on Martell for bringing the university into disrepute.

3. 360voice was founded by trapper markelz and steve snoop in April 2006, it was a major product of “it can talk system Inc.” it was a Gamers site. Users could read or subscribe via RSS to a blog about what their companion is doing every day on ox box live including tracking gameplay and issuing gamerscore challenge. It was also said to be the home of advertising programs.

This site (360voice.com ) uses software that auto blogs about Xbox owners gameplay and allowed players to compete with one other for prizes according to gamer DNA officials.

360voice.com was obtained by game DNA in April 2008 under a concealed terms. And was announced in June 2014 that the site would no longer be updated and was shut down in 2015.

This site (Livemocha) provided instructional material available in about 38 different languages, it was also a platform where speakers can interact with people and also helped people to learn new languages.

Research shows that the site had approximately 12 million registered members from 196 countries all over the world.

It was also free to join and however, it worked on a premium model too.

This website leverage the power of social networking sites for language learning. It was recorded that this website received attention from trade publications and national newspapers.

Unfortunately, the Livemocha community will be close on Friday, April 22, 2016, and you will no longer be able to access your account after the date.

And this was how the educative website went into extinction.

The developer of this app was Ben Rubin, this app was launched in February 2015 and it quickly gains popularity because of it features.

This was a mobile app allowed users to broadcast live video streaming via their mobile devices.

The feature on meerkat allowed users to connect their Facebook and Twitter accounts to stream directly to their followers as soon as they went live.

it was available both on IOS and Andriod five years ago.

Meerkat was closed down and replaced by house party on October 4, 2016

Social networking was founded by Emmanuel cassimatis launched in September 2010 with its headquarter in Paris, France, it was an online dating social network service available in different languages English, French, Chinese, german,Arab , Spanish, and Portuguese.

This website was primarily launched with a matchmaking algorithm and personality game developed with psychologists.

The current status of this website is defunct in which the dissolution date is unknown.

Was found in Reykjavik, Iceland in December 2007 by musicians Hauhue Magnusson, and petur ulfur Einarsson but was not launched until October 1, 2009.

This website ran an online music store and social networking music websites where people can streamline all song tracks for free. The aim of this online music store was to have artists paid fairly for the sales and distribution of kinds of music on the internet not having to pass through a record label. Not until 2013, that the site started having financial problems and had to lay off the entire staff. and later, the website starts displaying a message stating that it was temporarily closed, and finally the by May 2015 the site was completely shut down and was unable to be reached on 16 December.

Was privately owned by lifeknot LLC , created by Matt Muro, and it was founded in 2003. Lifeknot was a social networking website with the purpose of sharing interests and hobbies. This website makes it easy for people to meet new friends who share the same passion and interest, it helped people to build meaningful relationships based on their common interest and passion since this is all the website is all about.

It was dissolved with an unknown date.

Before the existence of Facebook, Friendster was one of the social media networks where people can make themselves visible, this social networking site was launched in 2002 and it dominated the Asian market, even though it was globally available, but it was recorded that 90% of the traffic came from the Asian part of the world.
Friendster over time evolved into a social game site and has about 115million users from the Philippines, Malaysia, and Singapore.
Just like other aforementioned sites It was shut down in 2018.

This social network is one of the company’s most highly profile misstep to date. The site was launched in 2010 in other to replaced google waves, another Google failed project.

These platforms were designed to enable it, users, to share posts either publicly or privately, with numerous lists of partners including twitter, youtube, flicker, and the once-popular FriendFeed site.

These failed social media platforms was an attempt made by Google to create a global social media site that would serve as a rival to Facebook.

Both of these sites were google mess which eventually was added to google failed project.

11. Daily radar This social networking site was known for gaming news, it was launched in 2000 and folded up as early as 2001 a year after it was launched. it was said to be a victim of dot come bubble.

Daily radar was relaunched in UK but under the name gameradar.

This was a photo blogging site, a photo-oriented social media platform just like Instagram. This social networking site was similar to Instagram and it enables users, to take a daily picture with a caption.

The now-defunct social media networking site was launched in February 2009 about a year and a half before the launch of Instagram. And it gained popularity has celebrities and influencers join this site, in less than six months it has 3milllion photos uploaded on it and 10 million comments.
But today, this once-promising photo-blogging site is nothing but a memory as Airbinab took over this site in April 2012.

Was a professional social media networking just like LinkedIn? This networking platform enables users, to connect with other professionals and also provides utility for online reputation online management.
Naymz.com was founded and privately owned by Nolan Bayliss, Tony Czupryna, and Tom Drugan in January 2006 but was launched to the public in June 2006. It was closed down by its owners in December 2017.

Was an online community created for people with cancer, it was founded by a cancer survivor Heidi Schultz Adams. The aim of the site was to overcome isolation and connect with other cancer survivors. it was later acquired by Livestrong foundation 2009.

15. Vine social media helped propel video into public notice, Vine was another legend mobile app that helped set the bar for how social media and video could use one another to thrive.

These aforementioned social media platforms failed because of one reason the other why must reasons for their failure was not unveiled.

Tife is passionate about things related to communication and sharing ideas,